Food of the Dead

November commemorates the faithfully departed in the Catholic liturgical calendar. An important month with a myriad of customs which have developed along the years when, given to poorer health care, death was at the order of the day.

Facets of intangible heritage, popular traditions, beliefs in souls and the afterlife have also left their mark on our culinary habits. On All Souls’ day, but also throughout the month food was offered to the poor since it was believed that good deeds with the needy would facilitate the redemption of distressed souls. Thus various communities made offerings of vegetables for a cauldron of soup referred to as il-borma tal-erwieħ. Similarly neighbourhoods raised a pig which was let loose in the streets and fed with scraps of food until it is cooked and fed to the poor as the ħ𝐚𝐧ż𝐢𝐫𝐚 𝐭𝐚𝐥-𝐞𝐫𝐰𝐢𝐞ħ on All Souls’ Day.

Today, the 𝐠ħ𝐚𝐝𝐚𝐦 𝐭𝐚𝐥-𝐦𝐞𝐣𝐭𝐢𝐧, a bone-shaped almond-based sweet, remains the most popular of culinary traditions linked to the month which commemorates the dead. 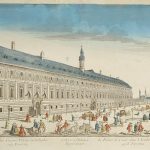 A dinner from 1739 in ViennaTasteHistory