Don Benigno Gauci, who was the parish priest of Lampedusa and whom we mentioned earlier this week, was probably Maltese as he had an uncle in Malta called Don Francesco Xerri. Don Benigno sent his uncle various goods with Captain German’s felucca, including a barrel of salted fish and a letter.

Well known by the corsairs, Don Benigno also took care of the venerated shrine of the Madonna in Lampedusa. This shrine was very peculiar, and a testament to mariners’ superstitions. The Spanish corsair captain Alonso De Contreras mentions it in his memoirs, written in the sixteenth century. He explains how every visitor to this shrine at Lampedusa, both Christian and Muslim, venerated this holy place and left food as an offering for shipwrecked mariners.

According to De Contreras, if ever somebody was greedy enough to take more food than they should from the shrine, their ship would never leave harbour. 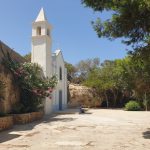 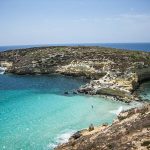