This watercolour by Charles Frederick de Brocktorff literally opens a window into a 19th century ‘Maltese eating shop’ to offer precious insights into food, dress, customs and aspects of daily life. It is very much a product of its age. To date this is the oldest known image of pasta being eaten in our capital city.

Artistic development in 19th century Malta is not only about the Nazarene and Purista endeavour to purge out ‘barrocchismo’. It is also very much about the establishment of genre views and landscapes. This is intimately tied with the Grand Tour phenomenon and the early calls of an expanding proto-tourist market in demand for easily accessible artworks, namely watercolours and prints, capturing endemic views, traditions and costumes to be kept as enduring souvenirs of their visit to the Islands. The Romantic ennoblement of the peasant class and technical developments in lithography were major catalyst forces. It is therefore no surprise that by 1845 Valletta was dotted with 17 art studios to cater for such a demand. Among these was the studio run by the Brocktorff family at 111, Strada Reale in Valletta (Republic Street) and later No. 81 and No. 104 along the same street.

Charles Frederick de Brocktorff had enlisted with the King’s German Legion during the Napoleonic wars, after which he travelled to England and, shortly after, to the Maltese Islands in the early 19th century.

He resided in Valletta where in 1811, he baptised his first-born son, Federico, at the Parish Church of Our Lady of Porto Salvo. It is certain that by the 1820s, he had settled down for good together with his wife, Giuseppa or Giuseppina, and his family which eventually grew into 12 children, 4 of whom followed in their father’s artistic footsteps.

Charles Frederick de Brocktorff’s artworks can be appreciated for their artistic merits, but are all the more valued for their high relevance in capturing social, topographical, historical, cultural and ethnographic slants of Malta to give us a unique insight into Maltese identity. One such image by Brocktorff which is full of information is this water colour recently acquired by Heritage Malta. From such a painting found in the National Collection, many details emerge.

Many snippets of a bygone era can be brought back to life. In the coming weeks Heritage Malta curators will be uncovering many details from this one image. Details which give colour and flavour to our Taste History events. Stay tuned for insights into pasta eating in Malta, Rum, Port and Gin drinking habits and much more

Some lucky guests will also get the chance to enjoy pop up events organised by Heritage Malta where visitors will be able to admire these artefacts and brush their palate with history. 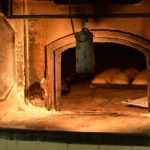