Would you have accepted an invitation to dine with the intellectual Canon Giovanni Pietro Francesco Agius de Soldanis? Besides being known as a Gozitan linguist, historian and cleric, de Soldanis was also distinguished for his hospitality and for the refined food which he presented to his fellow enlightened friends at his home in the Ċittadella. On Saturday 13th and Sunday 14th April, Heritage Malta is reviving this 18th century experience by extending an invitation to the public to taste a typical historical meal.

One of those who enjoyed such pleasant meals at the Ċittadella was Ignazio Saverio Mifsud, a consultant of the Inquisition in Malta, who formed part of the Maltese letterati and was a friend of de Soldanis. Likewise did the French painter, Chevalier Antoine de Favray, when he visited Gozo. Such encounters offered de Soldanis the opportunity to converse with fellow friends and men of letters.

In his renowned work ‘Damma Tal Kliem Kartaginis mscerred fel Fom tal Maltin u Ghaucin’, de Soldanis sheds light on life in Malta in the 18th century. Among the intriguing information, he provides so much details about food that it was possible to recreate a dinner which might have been served at his own house.

This event by Heritage Malta will take off with a welcoming drink and a brief talk at the Gran Castello Historic House in the Ċittadella. Participants will then be accompanied to a leisurely walk around the ancient fortified city, followed by dinner/lunch at the Ċittadella Cultural Centre.

The historical menu will unravel with a ġbejna (local cheese) served with ships’ biscuit, and followed by barley bread slices topped with sardines, freshly diced tomatoes and vinaigrette. Artichoke hearts flavoured with olive oil and garlic are accompanied by a dip of beans, traditionally known as bigilla, and a qassata (small pie) of seasonal vegetables. Fdewxa is the main dish, consisting of a type of tagliatelli, which de Soldanis described as flat and wide pasta cooked with herbs, legumes and at times milk to thicken the sauce. The meal will draw to a close with an agiazzata di limone – a lemon sorbet from an 18th century recipe, a coffee sweetened with ilma żahar (orange blossom water), and a slice of Pan di Spagna.

Price: €60 per person. Heritage Malta members will receive a free copy of the book ‘De Soldanis – an eighteenth century intellectual’. This book will be on sale during this event.

Tickets are available from all Heritage Malta sites and museums or online at https://shop.heritagemalta.org/ 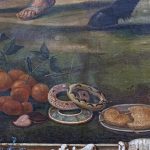